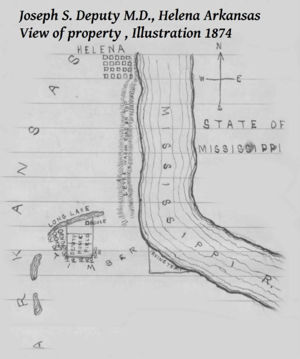 Many land records were in the name of Joshua Deputy, and by the time he was a practicing physician it appears he started using the name Joseph S Deputy.

Dr. & Mrs. Deputy had three children, Lucy wife of Pvt John H Penney, Mark who went on to become a doctor like his father, and Quintina M Deputy who was a dedicated teacher.

During the summer of 1862, even though Dr. Deputy hired his own guards to protect his 700+ acres, soldiers pilfered Deputy's food storage, barns, crops, tools, livestock, and acres of fences anyway.
Taking ill from the loss of all his assets, Deputy fell into a sea of whiskey [1] and drank himself to death in the fall of 1862.

After Dr. Deputy's death, his children sued the United States government for all the damages that were done to his property during the Civil War -- Over $58,000 .
In 1874, the heirs were awarded a mere $9,344.