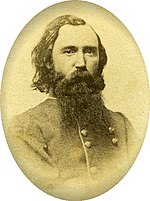 Confederate General Archibald Stephenson Dobbins of Helena after the War Of The Rebellion in 1866 went into mercantile partnership in New Orleans.  But the partnership didn't last long due to Dobbin's hatred of Union military still running the city.

Like at least one of the other Helena generals, Dobbins flew off to faraway Brazil in 1867 where other Confederates had hightailed it.  He reportedly started a plantation.  Then after writing his wife for two years and she was preparing to join him, the letters stopped.  Speculation is he either died in 1869 during an indian uprising or was living in Argentina according to an 1881 Chicago Tribune news report.

Read more here about the Disappearing Confederate General.
Posted by Earl Young at 8:20 AM