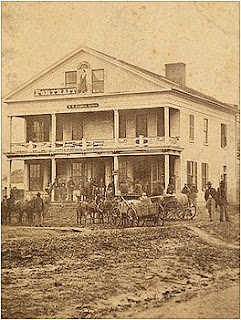 T.W., or Thomas, Bankes was a native Englishman who started as a teacher in America and eventually became a photographer with a studio in Helena, Arkansas at the start of the Civil War. This photograph of the exterior of his studio in Helena, features a number of Union troops, some of whom are African American. In response to a speech in Helena by Union Adjutant General Lorenzo Williams in April of 1863, several African Americans came forward to create the First Arkansas Volunteer Infantry Regiment.
Posted by Earl Young at 4:48 AM