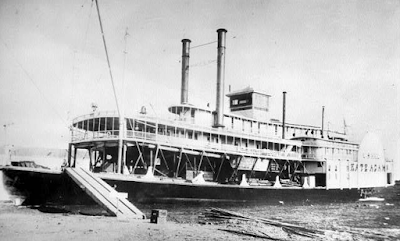 Steam Boat Kate Adams: Named for the wife of Memphis resident, Major John D. Adams, there were actually 3 steamboats named the Kate Adams. The boat was a frequent visitor to Helena, and usually plied the Mississippi River between Memphis, Tennessee and Arkansas City, Arkansas. The photo here was taken while in Helena. Legend has it that 2000 silver dollars were melted and added to the mold of the bell on the Kate Adams to give it a clearer ring.
Posted by Earl Young at 3:06 AM