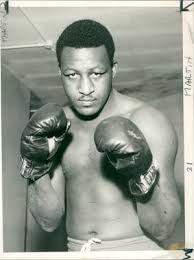 HELENA NATIVE ALMOST MADE IT TO TOP OF BOXING

A 36 fight veteran at heavyweight with some highly significant fights under his belt was this week’s assignment from “Bad” Brad. It was a name that I did not instantly recognize but once you start looking, you simply cannot look away.
Leotis Martin, 31-5, 19 KO’s was born in Helena, Arkansas, months before the beginning of the Second World War and he made his debut in the professionals 23 years later. By that point he had moved to Philadelphia and was being trained by Yank Durham.

Durham was best known for being the trainer for a Philly native – Smokin’ Joe Frazier. It was a training relationship some felt was significant later in Martin’s career.


If martin is known for anything then he is known for one particular fight, but more of that later. His career was of course far more than just one scrap. Thirty six fights with only five losses Martin found himself was in 2003 named by the Ring as one of the top 100 greatest punchers of all time – he was a noticeable man on the scene.

He was also the very first NABF champion – a title he won in 1969, in THAT fight. His success began though, in the amateurs when he became the 1960 Chicago and Intercity Golden Gloves champion and twice the National AAU 165 pound champion in 1960 and 1961.

By that point, it was clear that a move to the pros was not only on the cards but also an obvious next step. On the 26th January 1962 he made that debut in Canada as he beat Bobby Wharthen by split decision in Sarnia.

He went on for 15 fights and he never lost. Tinged with some sadness, this winning streak included a 1965 win, just 4 days after I was born, in Philadelphia, against Sonny Banks, after which Banks never recovered from the injuries sustained and died.

This bittersweet success lead to the WBA entering him into a championship elimination series – imagine that happening now… The circumstances around this was Muhammad Ali being stripped of his world title because of his stance on Vietnam. Unfortunately, he was matched in his first fight against Jimmy Ellis. Martin was to suffer his first loss. The fight was stopped in the 9th round as he was cut in the inside of the mouth and the referee, Ernie Taylor, called a halt. At the time he was matching Ellis on the score cards.

On his travels to get back into contention he went across to Germany to recover and knocked out the European champion in seven rounds. Martin had set his sights next on Joe Frazier but that never happened after he suffered another loss, to Oscar Bonavena in Buenos Aires on the 7th September 1968. Rumors were suffering however that his old trainer Durham was not keen on allowing Martin anywhere near Frazier. In 1967, journalist Mark Kram was to write, “Martin, out of the violent, devouring pits of Philadelphia, had been ducked by everyone, including Frazier, who would not fight him with a shotgun.”

We did get to gaze upon him in the UK as he came across the beat Thad Spencer by stoppage in the 9th round at the Royal Albert Hall. On the same bill was Joe Bugner but not many others of note.

It happened on the 6th December 1969 at the newly built International Hotel in Las Vegas and televised by ABC’s “Wide World of Sports”. The winner was to become the heavyweight champion of the newly formed North American Boxing Federation (NABF). Leotis Martin went in against the great Sonny Liston.

Liston was back. After losing to Muhammad Ali twice he had come back and won 14 fights, with thirteen by way of knockout. but had really not fought anyone of note but he was still one of the hardest hitting punchers ever. He was announcing his return and Martin was in his way – would he wilt?

Martin knew Liston well enough as he had been his sparring partner but when he got into a competitive ring with Liston he managed to record his biggest ever win. Martin was unfancied because he was a small heavyweight, Liston, was 21 pounds heavier. Martin also was part time as he was still a full-time machinist for the Budd Company.

The doom sayers were wrong as Martin did not trade but he outfoxed the older Liston. Managing to weather a storm in the 4th round he then, in the 9th, caught Liston with a combination that halted the older fighter’s winning streak. Sonny Liston fell forward, landing on the canvas, out cold. The referee counted 10 over him but according to journalist Jimmy Cox who was ringside, “He could have counted to 300.”

Martin thought so and immediately after the fight called out Frazier.

A detached retina crushed that hope and he was forced to retire. Cruelty never knew a bigger victim.

His signature win would now be the final fight of his career.

That cruelty followed him into his retirement. He lived quietly but after 31 years working as a machinist he retired early, but months later suffered a stroke and died en route to hospital.

That fight with Liston is folklore. People talk openly and warmly about it, but he was much more than that. He was a champion without a recognized world title belt but a real boxer of means in his fists. If only he had found better luck his legacy would have been greater, but his presence in the sport was nonetheless noticeable and strong.
Posted by Earl Young at 6:21 AM